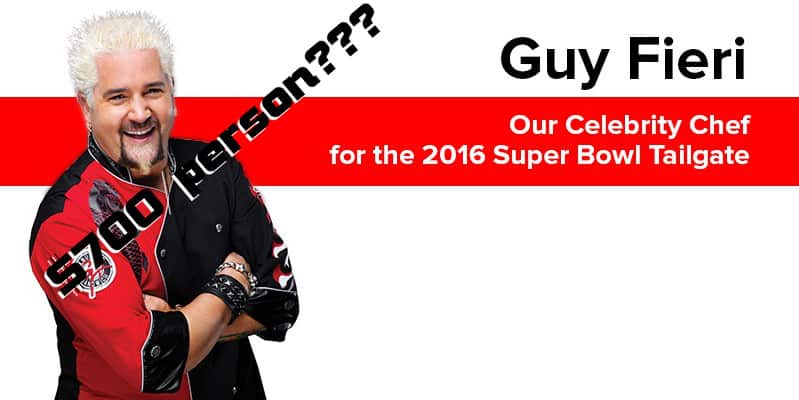 Guy Fieri, “celebrity chef” and the No. 1 draft pick for turning being a douche bag into a career, is fleecing the American public with his upcoming Players Super Bowl Tailgate prior to Super Bowl 50. The price tag just for entrance? $700 per person!

We all know that basic economics of supply and demand can drive up costs of goods and services, but at what point do we as sports fans and tailgaters say enough is enough? Calling this event a “tailgate” is a slap in the face to all those who tailgate. Just because you are serving food prior to kick off of a football game does not make it a tailgate.

Because tailgating is banned in the parking lots around Levi’s Stadium prior to the Super Bowl, that creates an even bigger demand for pre-game festivities. Apparently Bullseye Events can trot out Guy Fieri, offer up some bar food and charge $700 a pop. The only way they can get away with it is if people pay it.

So what does the menu for a $700 per person tailgate look like? Does it include Baked Alaska served by Pro Football Hall of Famers? Nope. Just your regular run of the mill bar grub you could expect from a local tavern.

The menu includes: Steak Sandwich station, Jambalaya, Mac & Cheese bar, “Meatball Madness”, a raw bar and salads. Oh, and don’t forget the Rice Krispy Treats for desert. Yeah, that sounds like it is all worth it for $700. Not that you could whip up the same stuff for a fraction of that if you went to Costco and threw a killer Super Bowl watch party.

In searching the event’s website, there is no mention of if the $700 price tage even includes alcohol… at all. No mention of getting two drink tickets or anything. Makes us think that getting a beer will cost you on top of your price of admission. If the admission price is $700, can you imagine what a beer costs?

Much of the food will be similar to the menu at Guy’s American Kitchen and Bar in Times Square. The “live nacho bar” is intriguing but that is until you read the online reviews of Guy Fieri’s restaurant. One review went viral from The New York Times, which described the nachos as:

How did nachos, one of the hardest dishes in the American canon to mess up, turn out so deeply unlovable? Why augment tortilla chips with fried lasagna noodles that taste like nothing except oil?

A person on Yelp left this review for Guy’s American Kitchen in Times Square:

Two Words: Glorified Friday’s. I expected more from this place. For $113 we had a (small) Cobb salad, a burger, and some grilled salmon. With 2 beers and a Coke. Ridiculous for the type of place this is trying to be. The food was ok, edible, but nothing to write home about. The service on the other hand was great. Our waitress was super friendly and knowledgeable. Not going back though, bad value for mediocrity.

Sounds like a rip-off to us but then again, who are we? We have only been tailgating professionally for years now. If you plan to go, make sure to bring a lot of cash because you will need it.