Having a keg at a tailgate party is awesome. Let’s face it, having a keg anywhere is really awesome. The problem with a keg is they can be so hard to keep cold which sometimes makes the entire process more trouble than it is worth. Getting a tub or a trash can and filling it with ice is not only a pain in the ass but can be expensive. If only there way a way to wrap your keg in an insulating blanket that keeps the heat out and the cold in. Now there is… Introducing The Kegster.

The first and only, full-branded keg insulating device. Perfect for any get-together, The Kegster keeps beer cold until the kegs run dry and looks damn good doing it. Ice is like a one-night stand… it has a short lifespan and things get messy in a hurry. Tubs are like mom’s old minivan, fat, unsightly and bring nothing to the party. BUT, these are things of the past. Ditch these outdated tools and be a part of the revolution… the Kegster revolution.

Why is The Kegster better? 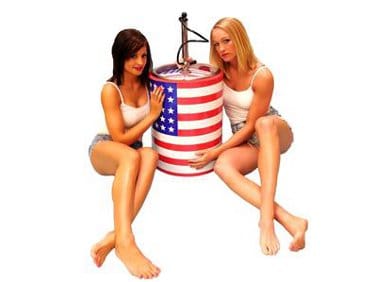 Material: The Kegster is made of industrial-grade rubber foam. In short, the foam was made specifically to insulate. Applications include industrial piping, HVAC… you get the picture. Most keg insulators are made of neoprene foam, which is great… if you are going surfing. But you’re keg isn’t going surfing. Your keg is trying to serve you some ice cold brews. So choose the device that is going to actually work. There is a lot of scientific jargon and math behind the Kegster’s choice of material, but it boils down to a basic premise: The Kegster keeps your beer colder for longer. Period.

Design: The Kegster’s three piece design efficiently repels the heat and maintains the crisp, clean taste of your beer. By focusing on the key points of heat transfer, the Kegster is able to effectively protect your beer. Top, bottom and sides… the Kegster has got you covered (literally).

Easy to Use: There is no ice. There is no tub. No more lifting a 150lb keg to get it into a tub of ice. It takes one person 30 seconds to suit up a keg with The Kegster. And clean-up is a cinch. No icy mess, no water seeping all over the floor… just pull off The Kegster, throw the shell in the truck and have your designated driver head back to the liquor store to bring back rounds two, three or even four

Branding: Two words… BAD ASS. The Kegster is functional, sure but it also looks bad ass. We have a multitude of designs to choose from including traditional wraps or collegiate themed. The keg no longer has to be an aluminum eyesore at your party. It can now be the theme of your party. And these things are chick magnets.

The Kegster comes in eight “traditional” theme wraps that are uniquely American and patriotic and show off state pride. (The collegiate themed Kegster wraps can be found HERE.) The traditional Kegster wrap themes are: (Click images for larger view and detail)

American Flag – It doesn’t get much better than Old Glory. Flying high above the American shores since 1776 (big ups to our girl Betsy Ross), the Flag has long been a symbol for liberty. Show your patriotism with the original Kegster and a salute to the freedoms that we are able to enjoy every day.

Back 2 Back World War Champs – America never went looking for a fight, but boy did we finish. Back to back champs feels good, as do back to back ice cold beers.

Star Spangled Hammered – We love our country and we love our anthem. We may not know all the words after having a few ice cold beers, but we sing it loud and proud, the way it was meant to be sung.

Vintage Old Glory – Old Glory is an older gal and she has some battle scars, but they give her character. She was not handed her freedom, she had to earn it. These scars are reminders of her long journey and just how tough she is. This tough old bird will prove to be more than a match for the damaging heat rays looking to compromise your beer.

Back to Back World War Champs

Heart of America – There is nothing better than the good ole stars and stripes emblazoned across a Kegster. Keep your beer cold, celebrate your patriotism and raise your glass to the greatest country in the world.

Don’t Mess With Texas – Everything is bigger and badder in Texas, its a fact. People from the Lone Star State don’t mess around and neither should you when it comes to keeping your beer cold.

Undefeated Since 1776 – Kicking ass and taking names since the Declaration of Independence put the Brits on notice we aren’t going to take any more of their crap from them or anyone else.

Benefits of the Kegster include: