The game of Beer Pong is rapidly gaining on cornhole as the main challenger to the title of most popular tailgating game in the parking lots. Improving the game of beer pong with respect to tailgating has come a long way. This includes our latest product: Point Pong.

Point Pong is a stand alone beer pong game that can be played on any surface, including in the water. Point Pong is a unique, patent pending Beer Pong table that is multifunctional in use. The entire game set includes a carrying bag with carry handles and detachable shoulder strap, two sturdy nylon bases, two strong plastic legs, two multifunctional tops, eight side cup holders, 20 colored rings, 22 – 16 oz. cups and six balls. When packed away in the carrying bag, the entire set measures 23″ x 7.5″ x 20.5″ and weighs just 11 pounds. This compact size and weight makes it ideal for tailgating and tailgate parties and saves valuable room in your car for other tailgating gear.

Take a look at the gallery below to see how the game is set up and what is all included.

Before you ask the question, the answer is, “Yes, you can play it in the pool too”. All you need to do is take the included drink holders and install them on the side of the tops. Put some plastic party cups upside down and trap some air underneath to make the tops float. You’ll also notice in the photos that when set up on land, the cups sit in the holders and not just on top of a table. This solves many beer pong problems like sloppy racks, tips and spills and even prevents wind from blowing the cups off like they would on a standard beer pong table.

As you can see in the photos, Point Pong also is assembled on posts and free standing bases. This allows you to place the stands at any distance you prefer. Since the standardized distance of a regulation beer pong table is eight feet, Point Pong comes with a string that attaches to the front of each Point Pong rack. When extended and stretched to the point the line is taught, the two bases are exactly eight feet apart. If you prefer a faster game or don’t have that much room in your tailgating spot, just move the bases closer together. And for those who prefer to bounce the balls, simply place a card table in the middle for those who like to bounce their balls.

Another cool feature that is included in the Point Pong set are the colored rings. You can place the rings in the racks and assign point values to each color to make the game more challenging and fun for those who are underage or who do not want to play with beer. Those who like playing with beer can also use the rings and make their own rules as they see fit.

Point Pong is four beer pong tables in one. The multitude of distances you can place the bases plus the ability to float it in the pool truly makes Point Pong the most versatile beer pong table available. Take a look at this comparison chart. 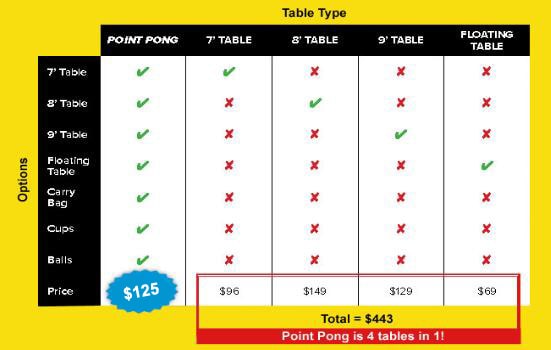