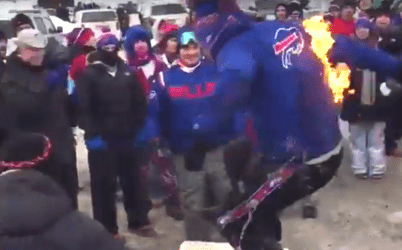 No, the Buffalo Bills fans are not so heartbroken about the team missing the playoffs they have resorted to Self-immolation. Actually the Bills fans and tailgaters have a lot to look forward to with a young team on the rise, a gifted quarterback looking to improve on his rookie season and head coaching stability, things are looking up in Orchard Park, NY.

Apparently in this gleeful celebration, one Buffalo Bills fans took it upon himself to do some furniture wrestling with a tailgating table that was lit on fire. In true WWE form, he jumped on it, igniting the back of his coat on fire. He went back for some more and stomped on the broken down table and fell again, getting more fire accelerant on his jacket.

Thankfully, after the throngs of tailgaters attempted to douse the flames with, (what else?), cans of beer, the unidentified tailgater was able extinguish the flames by placing his back up against a tailgating bus and the flames were gone.

For the safety of this tailgater, maybe we all should be thankful the Bills didn’t make the playoffs. Can you image how hard this guy tailgates in preparation for a home playoff game?