Back to Tow Hitch AccessoriesBongzillaNaked Pong

If you want to step up your tailgating game, bringing a TV to the tailgating parking lot is a must. And if you are going to bring a TV to the tailgate, you don’t want it taking up valuable table space. You want to mount your TV at your tailgating space much like you would mount it at home. Up and out of the way and safe from errant footballs that may accidentally come in contact with your TV. That is why you need to get a Tailgate TV Stand.

As you saw in the video, the Tailgate TV Stand is a hitch mounted TV stand that holds your flat screen TV and can rotate 360 degrees. The Tailgate TV Stand is essentially three pieces that assemble quickly in order to mount your TV for viewing off the back of your vehicle so long as it has a 2″ tow hitch receiver. The assembly really is as easy as 1, 2, 3. It consists of three pieces and sets up literally in less than one minute.

Step 1 – Insert the first piece into your tow hitch receiver

Once the pieces have been assembled, you place the your TV on the bracket and hook up your cords and electronics. It really is that simple. Most people think “some assembly required” and groan in pain, especially if you have to assemble the unit every time you use it. But honestly, it takes literally 30 seconds to assemble the entire Tailgate TV Stand to the point you are ready to hang your TV from it. Check out the assembly video to see how fast it can be assembled.

One of the major benefits of the Tailgate TV Stand is that fact that you can swing the arm 360 degrees. If the sun is creating too much glare with the TV facing directly backwards, just rotate the Tailgate TV Stand the opposite way and your tailgate party guests will love you forever. You can even swing the TV inside of the SUV, set up the kids to watch their shows while chilling inside the car and you can now tailgate with the adults knowing the kids are taken care of and out of the way. And as easily as it was assembled, the Tailgate TV Stand comes apart and packs away just as quickly. 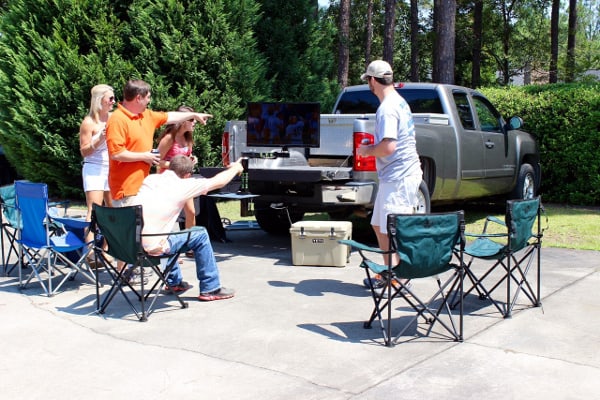 The Standard Tailgate TV Stand is designed for 360 degree rotation with a 32″ TV. Although the Tailgate TV Stand is ideally suited and designed for 32″ TVs, the TTS can accommodate TVs up to 42″ in size and still offer 360 degree rotation. The ability to rotate your TV with the swinging arm will be limited if your TV is larger than 32″, but the stand will hold bigger TV’s. The Standard model Tailgate TV Stand will hold TVs weighing up to 40 pounds. Ideal for those with SUVs or Crossover model cars that have a 2″ tow hitch receiver.

Another great feature of the Tailgate TV Stand is that it elevates the TV quite a bit and while sitting in standard tailgating chairs, the viewing angle is similar to how you would watch TV if the screen was wall mounted.