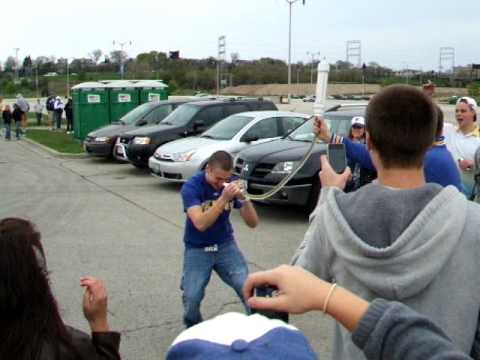 Ah yes, the beer bong. The simple act of taking an entire beer (or two), placing it in a funnel with tubing and letting gravity do the rest. But apparently drinking a beer as fast as gravity can send it down your troat is not enough. Leave it to Milwaukee Brewers tailgaters to come up with a faster delivery system. A pressurized beer bong with an added 40 PSI behind it.

Now that’s some rapid rehydration. And with every success there is bound to be failure right behind it.

If the pressurized beer bong might be a little too much for you and you prefer plain, old gravity, check out our selection of Beer Bongs and Shotgun Tools.