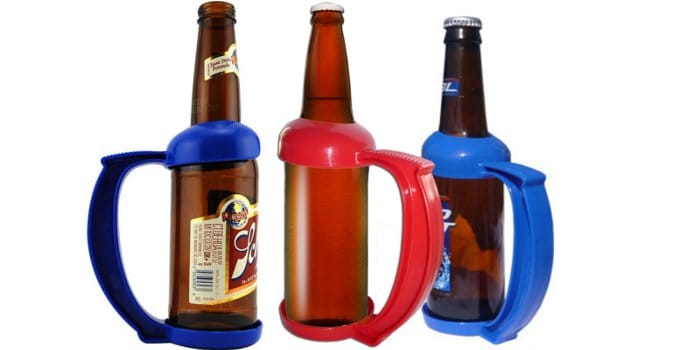 I’ll admit it. I was skeptical of the claim that the Bottle Grip would keep your beer cold just as if it was in a beer koozie. All it is is a plastic handle that snaps onto your 12 oz. bottle to make it look like you are drinking out of a mug. Rather clever for sure but how could it keep the beer cold as the manufacturer claimed? I decided to put the bottle grip through its paces complete with digital thermometers to see if it really can keep your beer cold. (Click on the images to view larger example)

The Bottle Grip is just like the Can Grip with the only difference it is designed to fit over a bottle instead of a can. The function of both are essentially the same. Keep your hand and body heat away from the can or bottle while also creating the illusion of drinking from a handled mug. We put this claim to the test and compiled a video to prove it. Although we used the Can Grip in the video, our results were the same when using the Bottle Grip. 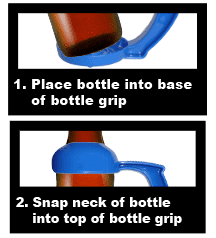 As you saw in the video, the beer using the Can Grip only gained about seven or eight degrees in 15 minutes. The beer I held in my bare hand for 15 minutes went from 37 degrees to 68 degrees. Definitely a warm beer that you don’t want to be drinking when you are out tailgating. Another cool feature is that the flat base of the Bottle Grip acts as a coaster as well. Not that I see too many tailgates with coasters out and about but just in case you didn’t want to leave water rings on someone’s table.

Not only does the Bottle Grip make your Natty Light look like an expensive import but it will keep it cool while your hand stays warm. This product worked so well that I have decided to offer it for sale here on Shop.TailgatingIdeas.com.

The Bottle Grip is available in Red and Blue. Bottle Grips come in a package of two with one blue and red bottle grip included.